The Twelve Apostles Then and Now.

The Twelve Apostles
Then and Now
We compared how Christ's church looks now compared to how it looked when it
was established with the original 12 apostles.
We reviewed how a new apostle was chosen when there was an opening after Judas left.
We learned how apostles and prophets are called today.
First the chairs were labelled with the original apostles and we added Matthias
Then the chairs were labelled with who the First Presidency and Apostles where at the time of President Hinkley's death.
We walked through how a new prophet and apostles are chosen.
We continued to go through the death of Elder Wirthlin until we came to the current First Presidency and Quorum of 12 Apostles.
We moved the names from chair to chair to show how they are seated by seniority not age and that any of the apostles may be called in to the First Presidency, it does not depend on seniority
(Example: President Uchtdorf was #11 when he was called in to the First Presidency)
It was a great visual for learning and my students were very involved and attentive to this process as names were moved from chair to chair.
The timing of this lesson is interesting as the Pope of The Catholic Church left yesterday and the Cardinals are preparing to meet and appoint a new Pope. Lots of comparisons to make. 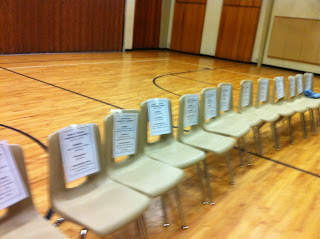 Next, we will match the photos with each name 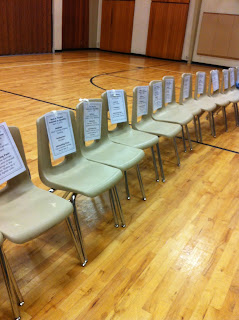 I used this quote from Elder Ballard:


Here is the entire  TALK  from Elder Ballard. Excellent message. Long, yet worth printing out and studying.
I got the idea for the chairs from HERE. Another GREAT blog to subscribe to.
Posted by Shauna at 5:23 AM